Everton player James Rodríguez talked about his feelings of playing under Ancelotti and Zidane in an interview. He said: “There are not many opportunities under Zidane. Players who have won championships." 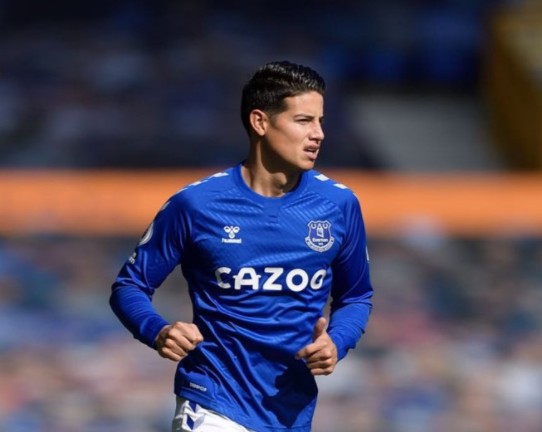 "Real Madrid is a huge dream I once had. To be a good player, to the place where so many classic players have been. I also got there with many outstanding players."

"I think they are all great players, because I did well in the World Cup, so I was under a certain amount of pressure. Then I thought,'Hey, I have to enjoy this, I have to live in the moment, I have to do the right thing. .'"

"I had a collaboration with a top coach at the time, and that was Ancelotti. He was very smart and he knew a lot. He knew how to manage the team, so I trusted him very much and I had a great year. I played Scored 17 goals and scored 17 assists. This is an incredible year."

"If you have a lot of talent, train hard every day, eat and sleep well, take care of yourself, and someone cares about you, then it will be much easier for you to play on the court."

"They are very nice people, they are very friendly. Everyone knows who Ancelotti is and his trust in me. I don’t get along much with Benitez because I won’t be here in four months. Up."

"Under Zidane, I didn't play too many games at the beginning. Because when you win championships with some players, you always trust them more, right?"

"So this is his situation. But, I learned from all three coaches. I learned good things and bad things, and I actually played fewer games under Zidane."

"In the last three years I really want to leave. Let me tell you why I left this year."

"Last summer, I got a very good offer from a club. I don't want to say the name, but I can go there because I know I won't play too many games in Real Madrid."

"I know this. So I got an offer from this club, but due to several problems, I was not allowed to leave."

"So I left this year because of circumstances, not because I wanted to leave, but because I knew I could not play in Real Madrid."

"But now I am here, I am studying every day, and I hope I can play more games in the future. I know I am talented and I believe in my work, so I believe in this."

"I remember there was indeed a conversation going on at the time. My agent Mendes has a very good relationship with this club."

"We have always dreamed of entering a big club. I have always admired Manchester United since I was a child. I used to watch Ferdinand, Giggs and Scholes."

"This team has a lot of great players. I really wanted to be there that year, but that didn't happen."

"I thought I had to play for a club that was not that big."

"Before the World Cup, I went to France from Porto. My plan was to participate in the World Cup, try to score goals, reach a good level, and then go to a big club to play from there."

"Then the story with Real Madrid happened."